Seniors:
24 seniors headed to Cumbernauld House Park for this year’s running of the National Short Course Cross Country Relays. The weather may have been dry, but the ground was well worn and there was a stiff wind to keep the test stern.

The men’s masters team consisted of John Stevenson, Steven Campbell, Paul Monaghan and Andrew White. The latter 3 names have teamed up in this event regularly in recent years, with a different fourth man, determined to get in the medal positions. This year it was Captain John’s turn to try get them the hardware, and he set himself off in the first leg to get a boost in doing just that. John covered the course in just over 15 minutes, a great effort from himself to get the team round in 14th position. Steven Campbell went next getting past 5 men, and Paul Monaghan followed passing another 2. Andrew White set off in 7th position and quickly gained 2 places an held that position until the end. Andrew gained 15 seconds on the eventual bronze medalists in that last leg, but the team were 21 seconds out of a medal position. A great effort again by the team.

The mes A team did not fare quite as well, with a depleted squad to chose from, Stephen Hanley was first man up in the A team. Even with his relatively good run, Shaun Lyon and Stephen Trainer had too much ground to cover in the next 2 legs. Sean Marshall ran the tail leg and did well in the worst of the ground conditions. In the B team, there were good runs from Stephen Reid and Frank McMahon (3rd M65). Malcolm McLean is getting used to the cross country running in his second outing on the surface and it was a change of distance for regular ultra runner Kevin Gill in the last leg.

The ladies also put their strength in the Masters team, with Sue Hewitson leading the A team out in the first lap. A superb run in 16.51 seen Sue round in 4th place. Lorna Coyle and Marian Monk followed on and the team finished in 6th overall masters position. Eileen Stevenson produced another good run in the tail leg of the Masters B team, the 4th fastest time from ladies masters runners. In the seniors team, Nicola Stevenson ran a superb final leg run of 19.09 to bring in 7 places, and the 4th fastest overall time by a female Harrier on the day.

Juniors:
It was a day of mixed fortunes for a young Harriers squad as they travelled to Cumbernauld to compete in the National XC relays. The dry weather belied the heavy underfoot conditions and all the runners can be proud of their efforts on a difficult blustery day.

First runner of the day in the U13 category was Ruby McGill who showed excellent pace judgement as she started steadily at the back of the pack before patiently picking off a number of runners to finish comfortably inside the top half of the field. Ruby handed over to Mhairi Moore in the U15 leg who, despite an unfortunate mix up at the handover, turned in the type of determined performance that her coaches have come to expect before passing on the baton to Alyshia Singleton. Alyshia stepped up to compete in the U17 leg despite being eligible to run as an U15 and she displayed great character to stay calm before producing an excellent performance to bring the team home.

This was an inexperienced team so all 3 girls deserve great credit for the efforts they put in. They will undoubtedly improve on their position as they continue to work hard and gain more experience at racing in this type of event.

Next up were the U13 boys with Jude Dolan, Cameron Patton and Alex Wiseman all toeing the line for the club. Alex had a steady run but disaster struck at the start line when the runner in front of Jude and Cameron stumbled causing both of them to fall to the ground and get spiked in the process. Both showed their mettle by shrugging off the pain and resolving to finish for the benefit of their team. While both will feel they would have been faster on another day they can be proud of the character they showed to pick themselves up and carry on.

Next up on The U15 leg were Harry McGill and Shaun Wiseman. Harry, like his sister Ruby earlier in the day, produced a strong and disciplined performance by hauling in a huge number of runners on his way to posting the 13th fastest U15 run of the day. Shaun gave an excellent account of himself over the hilly course and his coaches were extremely pleased with his efforts.

The final leg of the day belonged to Ryan Brown and Ewan Ferguson. Ryan has not had his troubles to seek lately with a succession of injuries hampering his training but he shrugged that off to post a very credible time that gives him a great foundation to kick on from as the winter season progresses. Ewan, like Alyshia, was running in the U17 leg despite being eligible for U15 but just like his club mate he was not overwhelmed by the step up and pulled in several places as he once again underlined his capacity to produce big performances when the chips are down.
(Big thanks to Coach Neilson for his report on the Juniors)

Conditions were perfect with Harriers Andy McCall, Andrew White and Chris Mooney managing to make it out of the office for the event run on the last Friday of each month. As usual this race starts with a frantic pace with 20-30 runners sprinting out the first 200m. After the 1st kilometre Andrew White had positioned himself in a pack just behind Inverclyde’s Chris Barlas in around 8th position with Chris Mooney leading a pack of runners a further 15 metres behind. Meanwhile Andy McCall decided to make things even more difficult by only just making the start in time to see the last runners making their way out. He quickly detached his backpack and headed out to chase the leaders.

At the turn Chris Mooney began to push to keep in touch with Chris Barlas and Andrew, managing to make up the ground with around 1 km to go. The group were now in a battle for fourth place with the leading three runners a further 150 metres ahead. It was Chris Mooney who first made a move with around 500 metres to go passing Andrew and Chris Barlas. Andrew broke to follow Chris as well with another runner from Newport with Chris Barlas now starting to tire. Despite making an early break for the line, Chris Mooney managed to hold on to finish in 4th with Andrew only a couple of seconds behind in 6th place (1st veteran). This was a personal best time of 09:39 for Andrew. Andy McCall meanwhile had managed to make up a number of places in the field to finish in a time of 10:40 (not bad considering his warm up consisted of a mile at race pace!)

A video of the frantic start can be found here (watch out for Andy McCall’s late arrival!)

Greenock Glenpark Harriers legend Dick Hodelet completed his 200th parkrun on Saturday doon the splash. Dick has been doing parkruns since 2009, when he was a regular at Pollock Park, and has completed 123 at Greenock since it began in 2014. Sadly, he wont get a free T shirt for 200, just have to do another 50 to get the coveted 250!

It was tough conditions on Saturday, but one harrier managed to get a pb! Well done to Claire Monaghan for her pb of 23.53, a full 17 second improvement and her first ever first finisher. Overall, it was a Harriers 1,2,3 with Chris Mooney edging out Mick McCloone and Daniel Doherty for first position. Not bad for Chris after his effort on Friday at 3k on the Green!

One other note, young Harrier Abbigael Crawford turned her hand to run report writing, and her work can be found here:
http://www.parkrun.org.uk/greenock/news/2017/10/29/greenock-parkrun-event-180-report/
It’s not as easy as she makes it look! 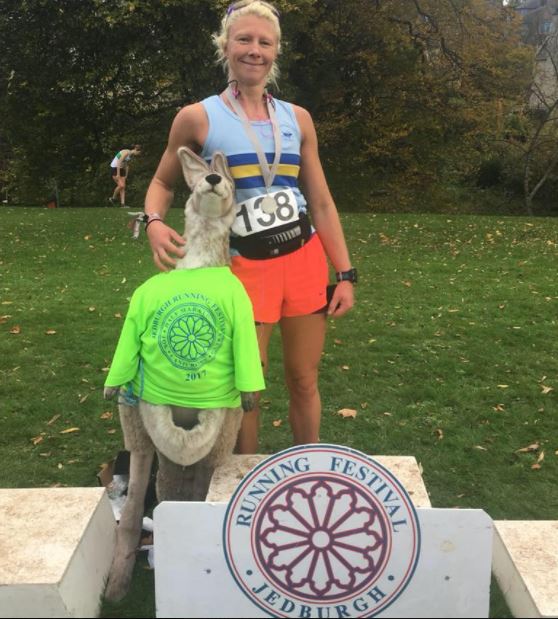 Fiona Ramsay continued her winning streak with her first position in the Jedburgh half marathon in a great time of 1.26.55. Her prize appears to be a stuffed Kangaroo… The race was part of the Jedburgh Running Festival. There was also an ultra marathon on the day, with harrier Emma O’Rourke taking part. Sadly, Emma was not well on the day and had to pull out after 22 miles. A fine effort when unwell! She’ll be back next year.

Boyd MacKenzie and Terry Wall competed in the Antonine Trail Race half marathon. This takes place on the trails in and around Kilsyth. The video below shows some excellent drone footage of the race!

Last, but by no means least, we had two Harriers make the trip over to the Emerald Isle for the 2017 Dublin Marathon. Both Ashley Anderson and Marianne McKay have certainly caught the running bug in their first year or so in the club and had both signed up to this as their first marathon. Marianne secretly wanted to break the four hour mark on her debut, and did just that. Fantastic effort. Ashley had not really been able to train for the marathon distance due to injury in recent months, but to get round in under five hours is a great effort. Well done girls!