Here are a few race reports from the last two months or so. We are always on the look out for race reports so don’t be shy in publicising your achievements!

Stephen Trainer and Mick McLoone headed to Germany in October for the Frankfurt Marathon. This marathon was Stephen’s target this year and had a good stretch of training in him. On the day Stephen was going well, and on for low 2.20 until about 30k. Sadly, it wasn’t quite to be for him, as the solo run and headwind took it’s toll on his legs. Still, Stephen finished under the 2.30 mark in  2.29.58. It wasn’t what he wanted, but it’s another marathon experience in the bag. The club are all looking forward to seeing Stephen back competing in the coming cross country events. Mick McLoone also found it a tough run, but was reasonably happy with another sub 3 hour marathon with a time of 2.59.24.

Bellahouston Road Runners’ annual 10k race took place on Sunday 11th November in Bellahouston Park. This race is ever popular with our Harriers and this year was no exception, with 19 Harriers making the trip to Glasgow. The race route has changed over the last few years to adapt to new guidelines from the City Council, and after last year’s route proved slightly more difficult for the runners, it was adapted again this year. The race started at the top of the hill in the park and consisted of 2 1/2 laps of the park, finishing at the bottom of the hill near the sports centre. It was an overall downhill course, but still required 2 hairpin bends and 2 climbs up the main hill.

The weather was bitterly cold and a fair downpour greeted the runners at the start line. After the remembrance day silence at the start, the runners were eager to get going just to get some warmth! The cold weather didn’t stop our first female finisher from getting a new 10k PB, Kirsty Ormond cashing in on her good recent training with a time of 43.12. Donna Campbell and Lorna Coyle were next home for the ladies in 46.20 and 47.24 respectively, with Viki Smith and Lynsey Mooney also running. 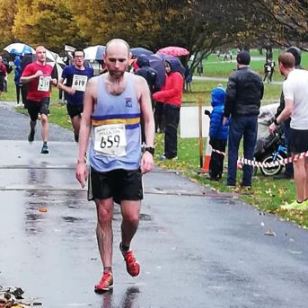 There was medal success in the age categories on the mens side, with Graham McGrattan claiming first v60 in 42.19. Chris Watson was the first Harrier home, holding off the fast finishing Gordon Hepburn. There was only 6 seconds separating the 2, with both running low 38 minute times which is excellent considering the conditions on the day. Also under 40 minutes was Stephen Hanley and Steven Watson, with Hanley just about holding off the typically fast finishing negative splitter Watson. George McCallum posted a good time of 41.15 in his first race back since competing in the Dunoon Ultra last in October.

Elsewhere in the mens race there were good times from Stephen Reid, Kenny Scoot and particularly from James Campbell. James has featured recently in our reports for running great at the club’s Colin Shields Race, and he continued that here by breaking the 51 minute barrier. There was support on the route from Harriers, and the photo show just how poor a day it was to be standing outside cheers the runners on!

Only one Glenpark Harrier travelled to Killin to complete in this years race on the 3rd of November. Fiona Cushnaghan decided to do it as it fell on her birthday! The race starts and finishes in the lovely village of Killin, it is a lovely scenic route, however on the day the weather was mostly heavy rain and gale force winds! Fiona was pleased to complete it in 6hrs 32 mins. This was Fiona’s 7th ultra! Fiona would like to thank the other runners and stewards who were very friendly on what was a bleak day.

The ever popular George Cummins Road Relays took place in early October. There was the usual great turnout from the club there, on what was a busy weekend for racing. The mens A Team had a youthful look about it, with Chris Mooney vastly increasing the average age of the group! He set off first and set a great target for the young guns to follow. Ryan Brown, Alan Mollins and Harry McGill all ran well, with Harry putting in another strong run over the short distance following on from his club race win a few weeks before. Chris’s time of 13.38 was over a minute faster than the previous year and was good for 24th overall on the day.

The ladies were worst affected by racing elsewhere, but Marian Monk was able to field a vets team in which she, Claire Monaghan and Nathalie Smith all ran well. Marian took a whopping 40 seconds off of her time from last year. However there was not to be a repeat of the Callum Hawkins stalking from the previous year…

The mens B team fought hard and each runner finished within a remarkable 12 seconds of each other! Chris Watson lead out the C team and put in the best run of the group (which would have also seen him within that 12 second gap in the B team!). 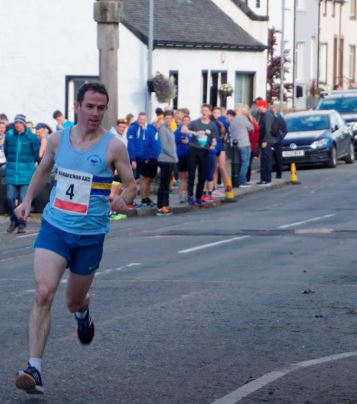 The top vets team from the club saw Robert Dolan set off in the first leg, and he ran a stormer to get round in 15.42. Alan O’Rourke, Ross Neilson and Danny McLaughlin helped them to 7th vets team overall. The next team were also made up from vets runners, and a late entry saw Paul Monaghan in this group running a cracking 14.46! The rest of the team were very consistent in the low 18 minute range, with Robin McAuslan and Stephen Reid improving from last year. Mick Dunn put up a trong showing in the fourth leg of the final team, with one of the fastest v60 run of the day.

Not content with putting in the 3rd fastest time for the club at the Kilbarchan Relays the day before, Paul Monaghan went out and ran a 76 minute half marathon the next day. This was good for first v40 and 2nd overall place at the event in Kirkintilloch. His exact time was 1.16.25, well done Paul!

Lucas Bezian ventured north for the second year in a row to take part in the Loch Ness Marathon. He completed the race in 4.44.35, taking over 24 minutes off of his time from the previous year! Great running Lucas!

Who fancies an early start on a Sunday morning, in winter, to go run over the Erskine Bridge, twice!? Not me that’s for sure, but 12 other Greenock Glenpark Harriers fancied it! A great turnout for the event which is becoming more popular each year.

It is a tough route with, as you can image, a great deal of climb involved, and a fair share of wind! It is hard to judge times compared to a regular 10k event. A sub 40 run would see you make it into the top 5! Kirsty Ormond was first Harrier home (and 4th overall)  closely followed by Donna Campbell (6th overall). Lorna Coyle was clear in third (1st v50) with Cheryl Thomas and Fiona MacFarlane (3rd v40) following on behind. Graeme Crawford was the first male runner back for the club. It was also good to see Erskine natives David and Emma Benstead out running the course as well.

3k on the Green

The 3k race in Glasgow Green on the last Friday of each month is getting increasingly popular with Glenpark Harriers who work in the city. Nicola Stevenson is becoming a regular, having appeared in all 3 in this period. She also showed remarkable consistency to finish all 3 within a 10 second timeframe, with her best coming in October in 12.58. Her family joined her for the August edition, with John and Eileen trying the event for the first time.

A good group of harriers ladies joined Nicola in October, with Cheryl Thomas, Lorna Coyle and Lorna Coyle all trying the event out. It is a very popular race, with the small £2 entry going to charity each month. It was even popular just last week on what was described by the run director as a “particularly horrible day” (or slightly stronger words to that effect). Stephen Hanley took 42 second off of his previous time, and 15 seconds off of his PB with a run of 10.31 with which he even surprised himself!