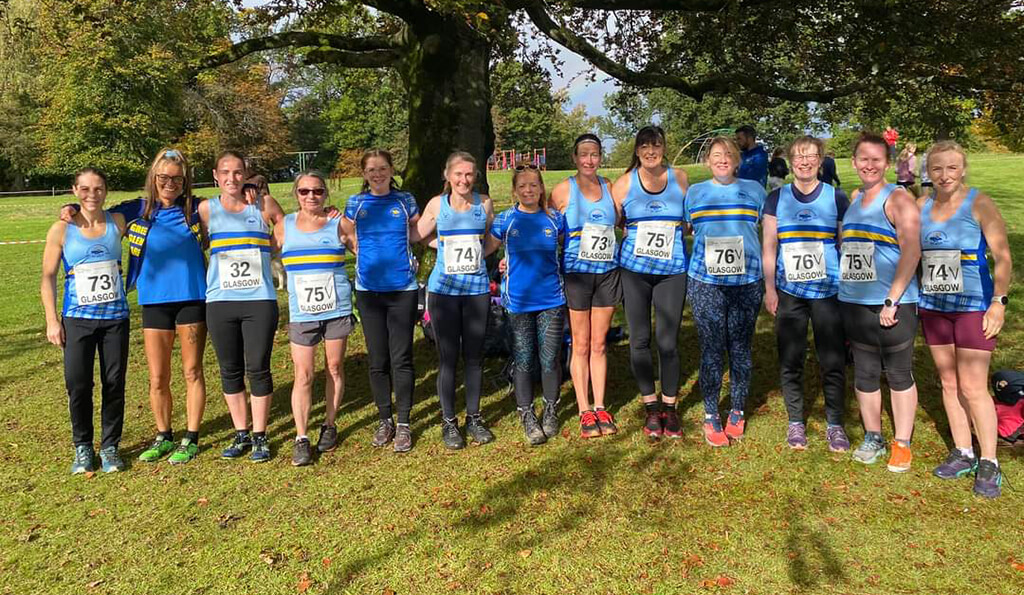 It was surprisingly dry and sunny after a week of continuous rain at Kings Park for the 2022 West District Cross Country Relay Championships. The Kilbarchan relays (George Cummings road relays) and Renfrewshire Cross-Country Championships were cancelled this year, so this was the first official race of the cross-country season.

With many twists and turns mixed in with a lot of short but testing inclines, the single lap 4,000m course, shoe-horned into a compact Kings Park, was very challenging for athletes and marshals alike. Despite the best efforts of marshals, a few runners including the leaders in the men’s race unfortunately took wrong turnings.

Taking over from Ruby, Ashley Anderson (18:27) had a cracking run on her return to cross country, handing over to Lynsey Mooney in 30th place. Lynsey (21:20) pulled the Seniors team through to finish 39th. It was incredible to see Lynsey racing today following such an arduous achievement in winning silver at the Dunoon Ultra just last week.

A special mention goes to June Anne McKnight (25:58) who moved the fourth team up 7 places after the second leg. Unfortunately, we didn’t have a third leg runner to complete the race.

In the men’s race, three Senior and two Vets teams were entered. 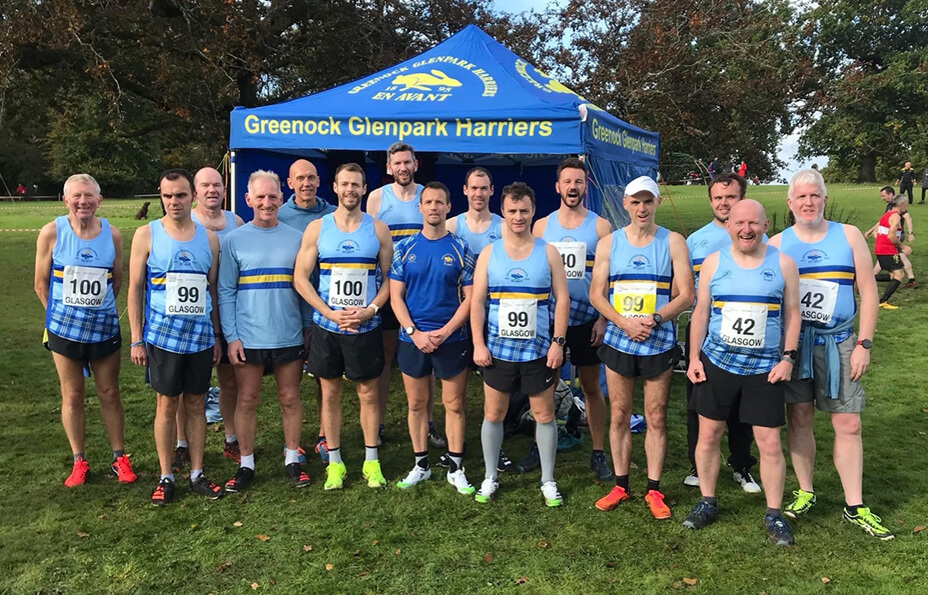 Did Somebody say “Hoka!” to Andy and Stephen?

Steven Campbell (14:45), running on the first leg for the Senior men’s team finished 42nd followed by Chris Mooney (15:25) in 52nd place. Next in was Campbell Cromar (16:54) just 23 seconds ahead of Graham McGrattan (17:17). Graham is on course to peak for his International in Dublin in a few weeks time. Stephen Reid ran well to finish in 19:24 as the club’s final first leg runner.

Taking over from Steven, Stuart Greenway ran the fastest leg of the day for the club to move the first team up from 42nd to 25th (13:35). Young Michael McLoone (14:59) moved the first team up a place to 24th, handing over to Andrew McCall. Andrew (14:07) ran strongly on the anchor leg to pull back another place, giving the senior team 23rd overall out of 99 teams.

The performance of the day came from the V40 first team.

Andrew Osbourne (14:29) took over from Chris, showing the form that’s won him a few races of late to move up 13 places to 39th. Andrew then handed over to Neil Lafferty. Neil (14:16) ran the fastest lap for the team, moving up another 10 places to 29th. Finally, with a brilliant sprint finish, Paul Monaghan (14:28) closed the gap to leave just Shettleston between them and our first Senior team. Paul secured the team a well-deserved V40 bronze medal and 25th place overall. 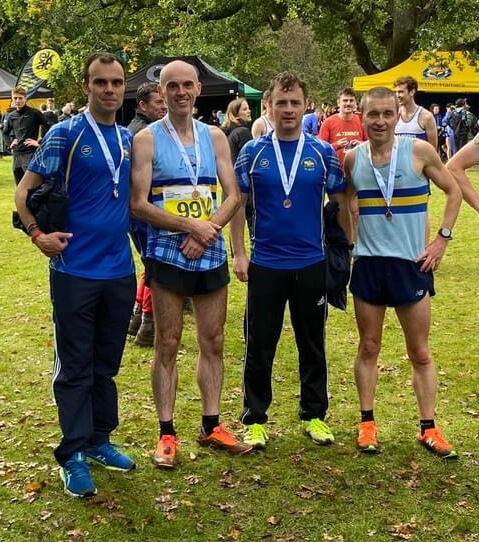 This bodes well for the club’s vets at the Nationals in 2 weeks –  22nd October at Cumbernauld.

Aiden Coyle ran a superb 22:45 for his first cross country race, whilst Scott Hill (18:50) showed further improvement thanks to his recent training consistency and racing. 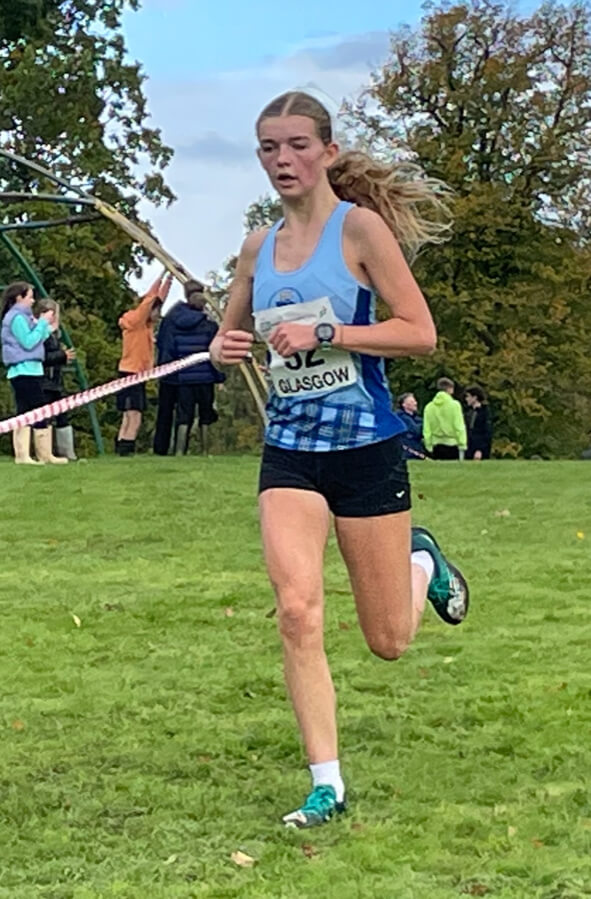 Ruby in the Seniors First Leg 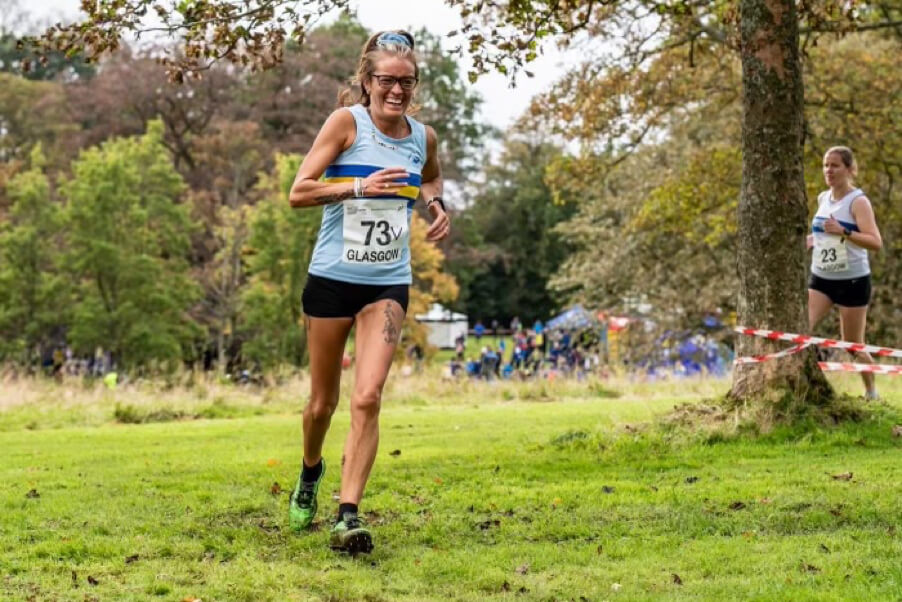 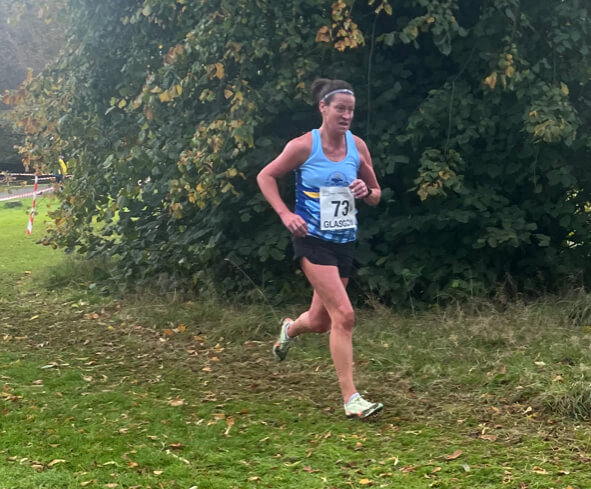 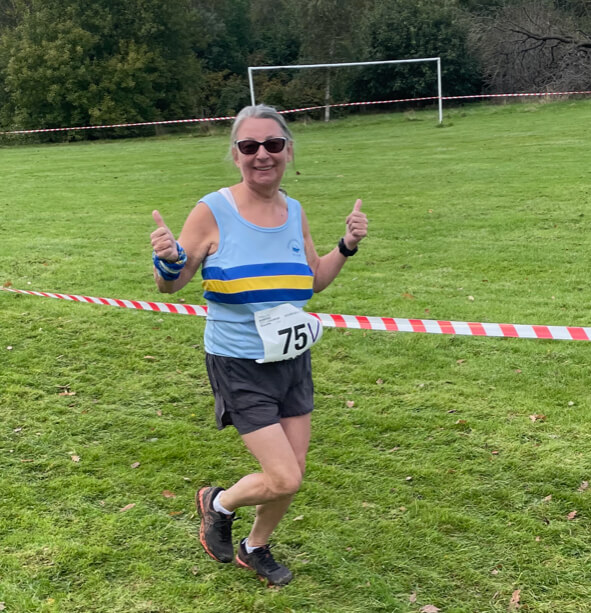 Charlotte Without a Worry in the World 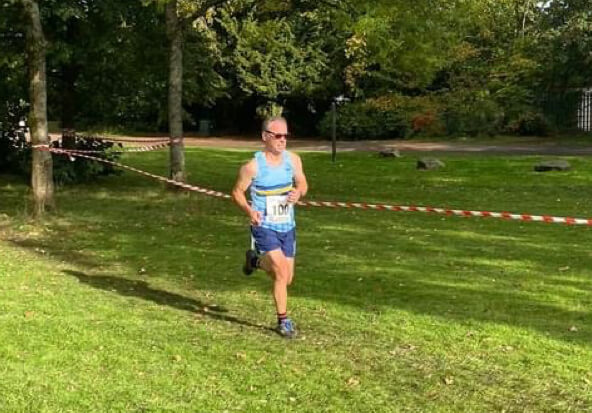 Gavin – As Cool as Ever 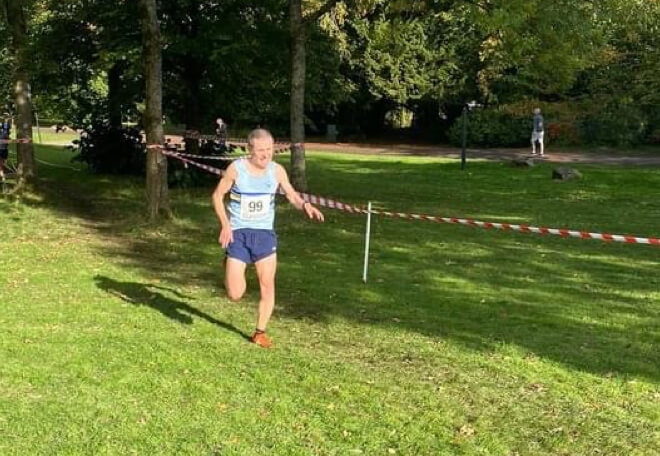 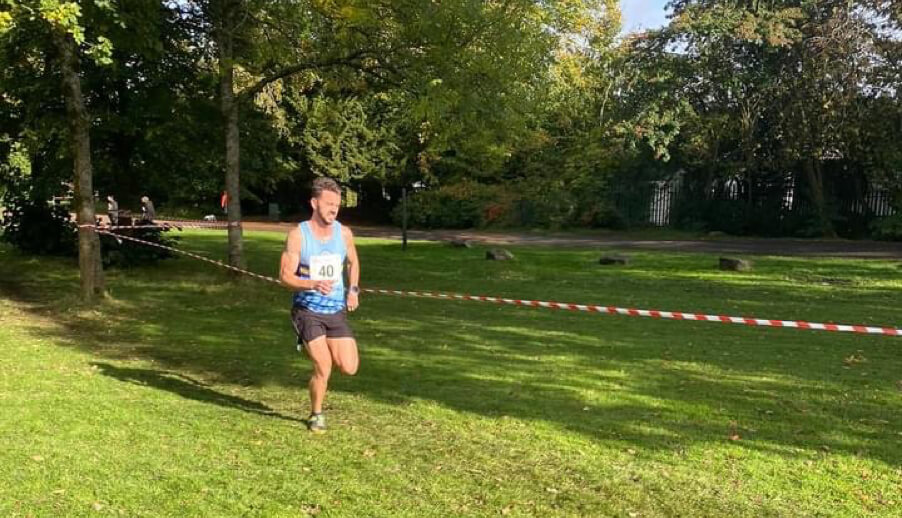 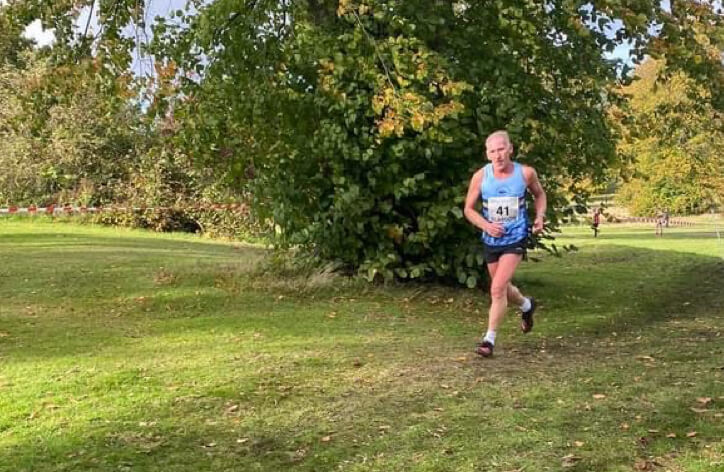 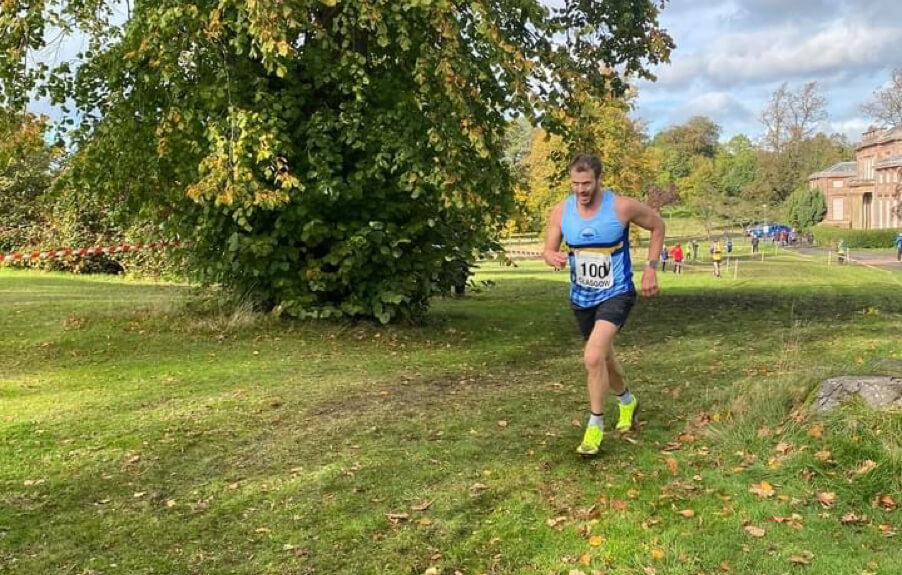 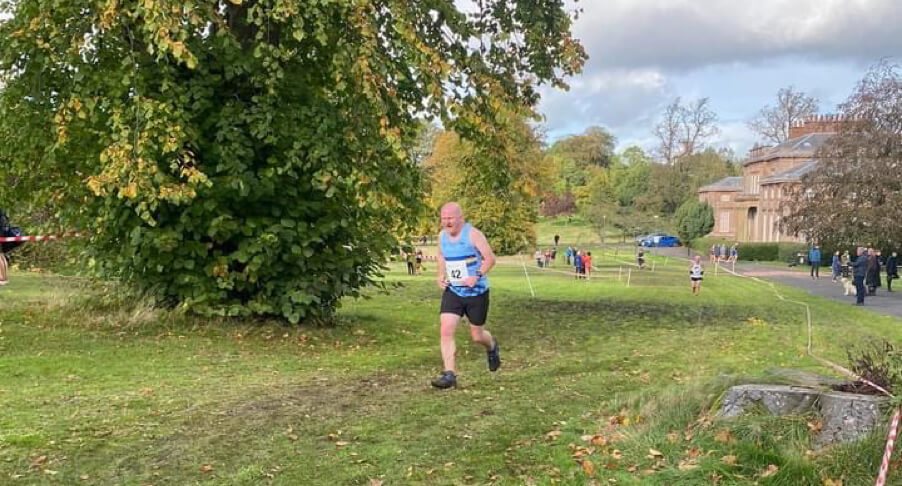 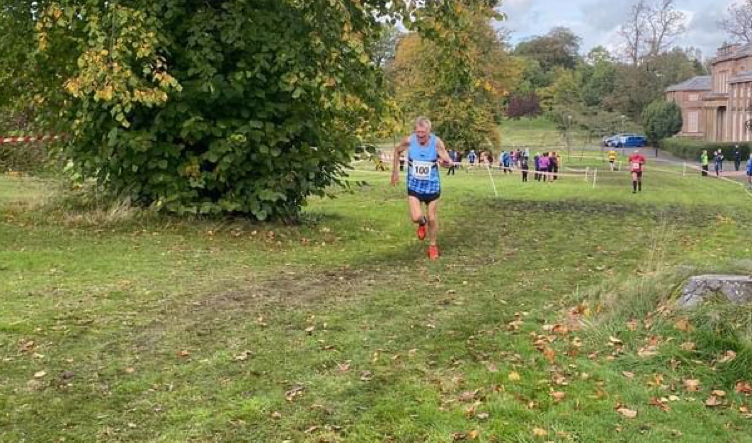 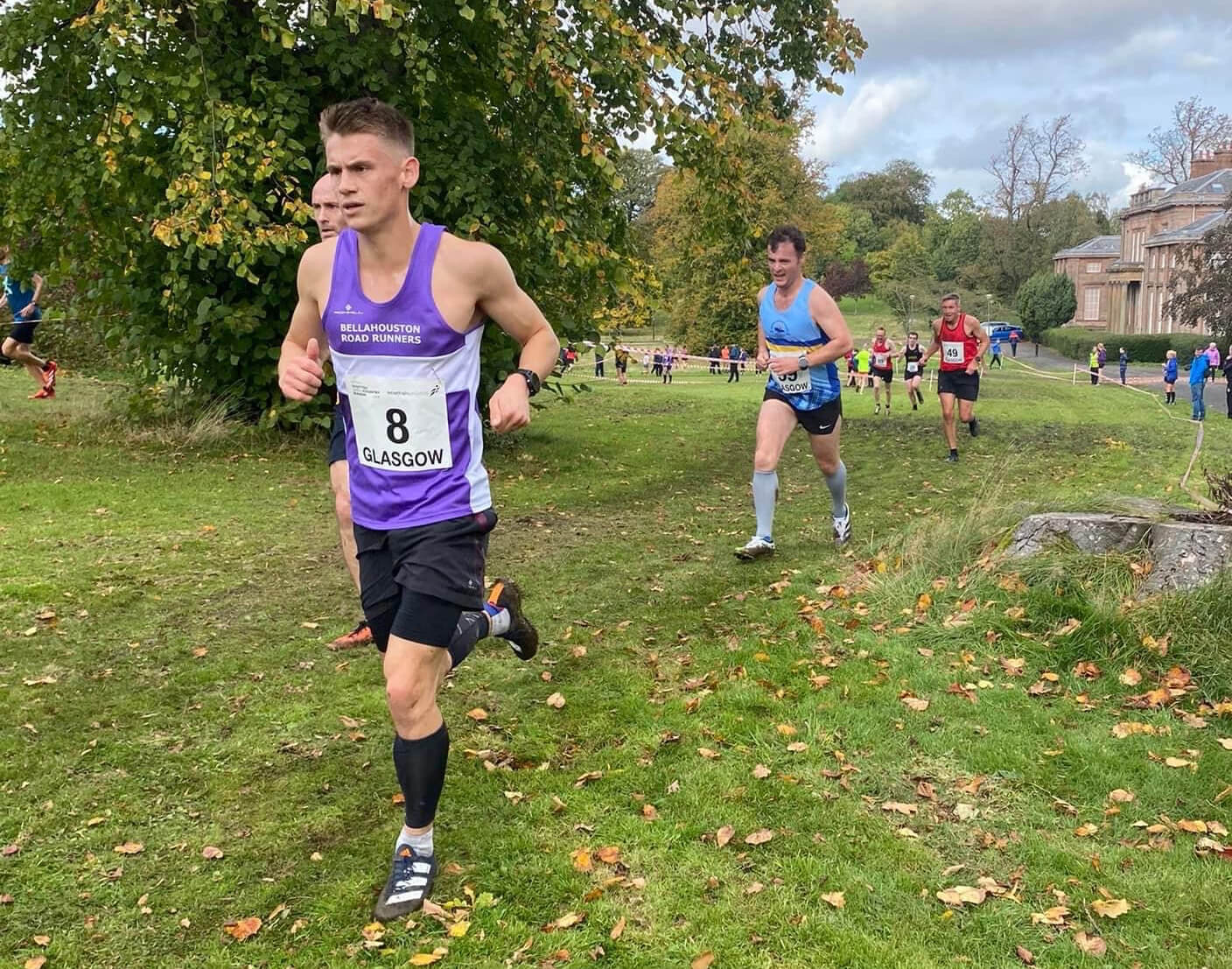 The Captain Setting a Good Example