The 2022-23 Greenock Glenpark Harriers racing season got off to a flying start in the Greenock sunshine on Saturday. 90 runners hit the Splash in hopes of getting their season off to a fast start!

Our junior athletes got us underway with 1km and 2km races. Orla Trainer took the win in the 1km in 4.18, with Mila Killeen and Ollie Baillie just behind. The 2km saw Summer Taggart take the win in 8.12, ahead of Erin and Aimee McEleny. Some speedy times for our youngsters and this season we want to see our junior races flourish again like they did pre pandemic.

The senior race was contested by a whopping 80 runners! The race was held over a 4km flat road loop, starting at the yellow pole on the esplanade and out to the Battery Park and back. The traditional season opener is this distance to give our team captains food for thought in the upcoming Cross Country Relays. The short distance and perfect conditions meant it was a real lung buster!

The ladies race was made even more interesting with the appearance of new member Jill Knowles, who has some pedigree in the local running scene. She battled against last year’s champion Marian Monk, returning former champion Sue Hewitson and junior starlet Ruby McGill. Jill took the win in a nippy 15.16, the fastest time at this race since Shelby Morrison in 2014. Sue held off Ruby for 2nd place, with Marian not far behind in 4th.

This month has seen the start of a push to get more of our lady members racing. Our membership is now an impressive 46% female, and this is always represented at our training sessions. However, the average turnout in last season’s club races was only 29%, with this particular race being the lowest. The ratio was 33% female on Saturday, which is a good start but we can do better!

The mens race was a belter. Returning past champion Shaun Lyon held off last season’s club champion Neil Lafferty by just 2 seconds to take the win in 12.52. This season is shaping up to be a very tight affair for the men, with new member Dylan Crawford coming in 3rd in his first outing as a harrier. The big summer signing will be a real threat over the coming months! Add some of last season’s race winners like Stuart Greenway, Paul Monaghan and Andrew Osborne into that mix too. They rounded out the top 6.

Some of the best runs of the day came in the chasing pack, with Daniel Doherty getting back to his old self just behind young Kyle Johnstone who continues to impress. Owen Atkinson ran really well to smash under 15 mins, and we have to give a shout out to Kev Craig who nipped back over from the Hell N Back race to run for the club on the same day, and still managed a sub 15 time.

Some notable female times included Fiona MacFarlane, Ashley Anderson and Gil Sullivan, as well as returning former lady champion Rhonda White racing for the club for the first time in 6 years. The midweek training sessions with big numbers have really help push our female athletes along in the coming months, and will be extra important as we head into the winter months. 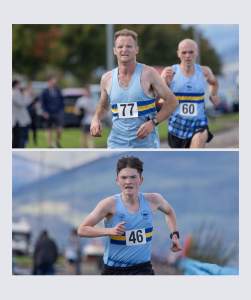 Big thanks to all of our volunteers out there keeping the runners and the public safe on what was a very busy afternoon along Greenock’s waterfront. It is never an easy task, and we appreciate our effort. A big thanks to The Dolan Family for sponsoring the race again, we rely on the generosity of our sponsors each year. Also to the photographers Campbell Skinner and Tracey Howe for giving up their time for the afternoon and capturing some great shots.

Next club race is the Colin Shields 4.5 mile time trial on October 29th, starting at Notre Dame High School. Look out for more info soon! We also have our annual prizegiving at The Regent Club on Friday 14th October. 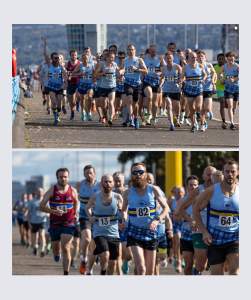