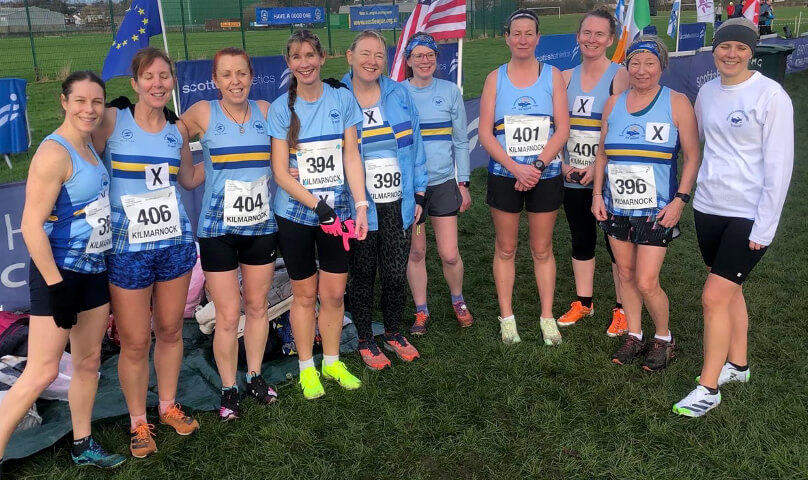 Twenty six Glenparkers travelled to Kilmarnock to compete for the club at this year’s West Districts. It was a perfect day for cross country running. The course was less hilly than last year’s West Districts at Balloch Park which made for a fast and furious start in each race.

Bellahouston’s Catriona MacDonald won the Women’s race in an exciting head-to-head with Nynke Mulholland of Inverclyde (who eventually had to settle for silver). Nynke bravely made a big challenge to win at the start, pulling nearly 50 metres away from the field. Clare Stewart representing the University of Glasgow took the bronze.

The course had been slightly changed from previous years.  The first half of the course was the same open and fast first mile, whilst the second half was constrained within one field instead of the original two. This involved a lot of doubling back, leaving runners unable to overtake. So, moving up the field had to be done tactically at the start of each lap.

Sue Hewitson was chased determinedly by Marian Monk (39:01) for the first two laps. Unfortunately however, on one of the turns on the second lap, Marian ‘faceplanted’ in the mud (her words), allowing Sue to break away and finish just over a minute ahead in an excellent time of 37:51. Consolation though for Marian was news that she had secured 3rd place in the V50s category. Next in for the club was Vicki Smith (42:18) who did amazingly well given she’s already run 11 ultras and 2 marathons this year ! Cheryl Thomas (43:14) had an excellent run too, finishing fourth counter. Cheryl enthusiastically remarked afterwards that she really enjoyed this new Kilmarnock course. Next in was Lynne Harrison (45:13) in her first ever cross-country race. Lynne summed the experience up by saying she also thoroughly enjoyed it. Sixth in for the club was Claire Monaghan (46:28). It’s great to see Claire back racing cross-country and getting back to her best. New member Sarah Whalen (47:57) was next in with another strong run, continuing to improve. Meanwhile, in the W65 age group, congratulations are due to Charlotte McKay (55:13) who had a cracker of a run to place 2nd. And in 9th place for the club was June-Anne McKnight (56:28). June-Anne smiled her way around another tough course! Lynsey Mooney unfortunately had to drop out as she was still struggling with injury following her tremendous run at the Dunoon Ultra. Sue, Marian and Vicki secured 6th in the Master’s competition and with 4th counter Cheryl, the first team finished 12th. 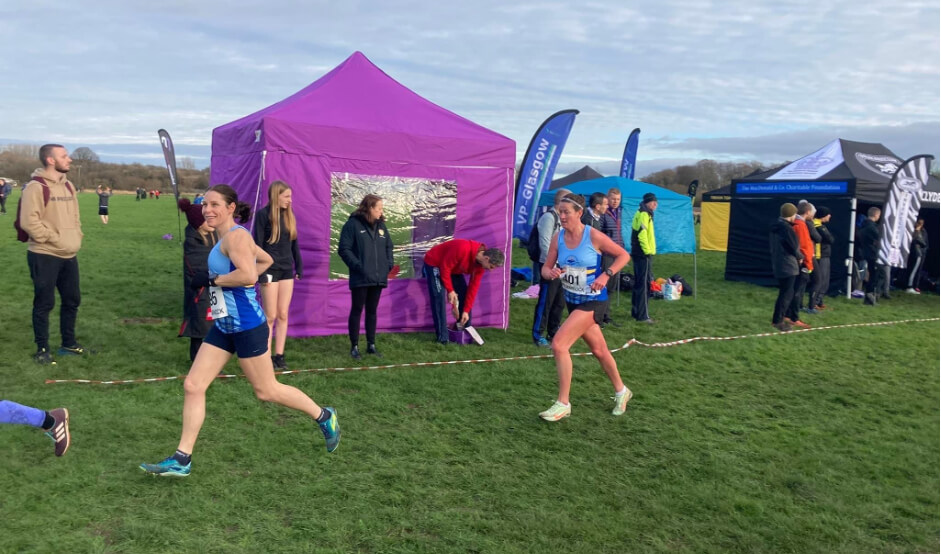 Sue and Marian going into the second lap

June-Anne smiling her way around the course 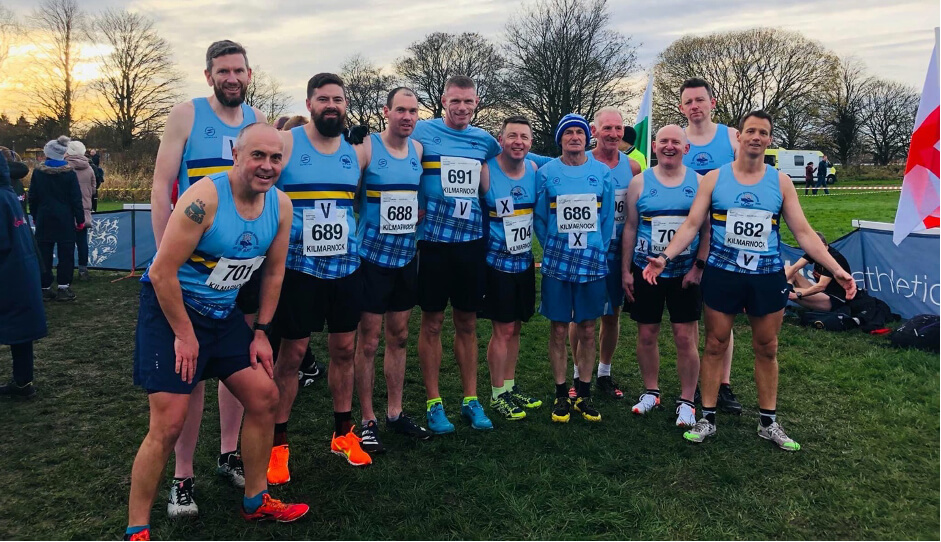 Duncan Robinson of Giffnock North took the gold in the Men’s race. Duncan, who took up running via Cani-cross (running with his dog), was followed home by Shettleston’s Seyd Taha Ghafari and then Jamie Burns representing the University of Glasgow.

Stuart Greenway (30:20), with his continued run of excellent form, finished first for the club in 37th place. Next in was Dylan Crawford (31:29) with an excellent 67th place. Just twenty seconds behind Dylan was Paul Monaghan (31:49) who secured himself  a silver medal in the M50 category. Club Captain Steven Campbell (32:40) was 4th counter for the club and 6th  individually in the M45 category. Other counters for the Men’s first team, which placed 11th overall, were Chris Mooney (33:50) and Gavin Morrison (35:06).

Colin McKnight (36:35) ran a very assertive race, easing away from a group of 3 Glenparkers after the first mile. Colin was followed in by the two others; Campbell Cromar and Stephen Harrison (both on 37:25), who, between them had a close head-to-head tussle all the way. Next in was Danny McLaughlin (39:01) who’s running improvement of late has been exceptional. This bodes well and we wish Danny all the best for a good result in the M65s at the Nationals in February. Another great run came from Mick Dunn (40:00) who has also shown a great return to form, finishing just less than a minute behind Danny with a fabulous sprint finish. Alan O’Rourke (40:16) and Craig Hyslop (40:18) worked off each other to show their strength and passed a number of runners in the second half of the course. It was good to see John Stevenson (41:02) back racing himself fit again. John will be one to watch in the handicaps over the next few weeks (please note handicappers :-). New member Gerry Gallacher (41:49) won the “Finisher Photo the Day” competition (see photo below). Less than a minute behind Gerry was Stephen Reid, who completed the line-up for the Glenpark Team on a great day’s racing.

Unfortunately, David Holmes, who started really strongly, didn’t manage to finish. Hopefully however David has a good run at the upcoming Harris race which will be held at The Coves this coming Saturday. 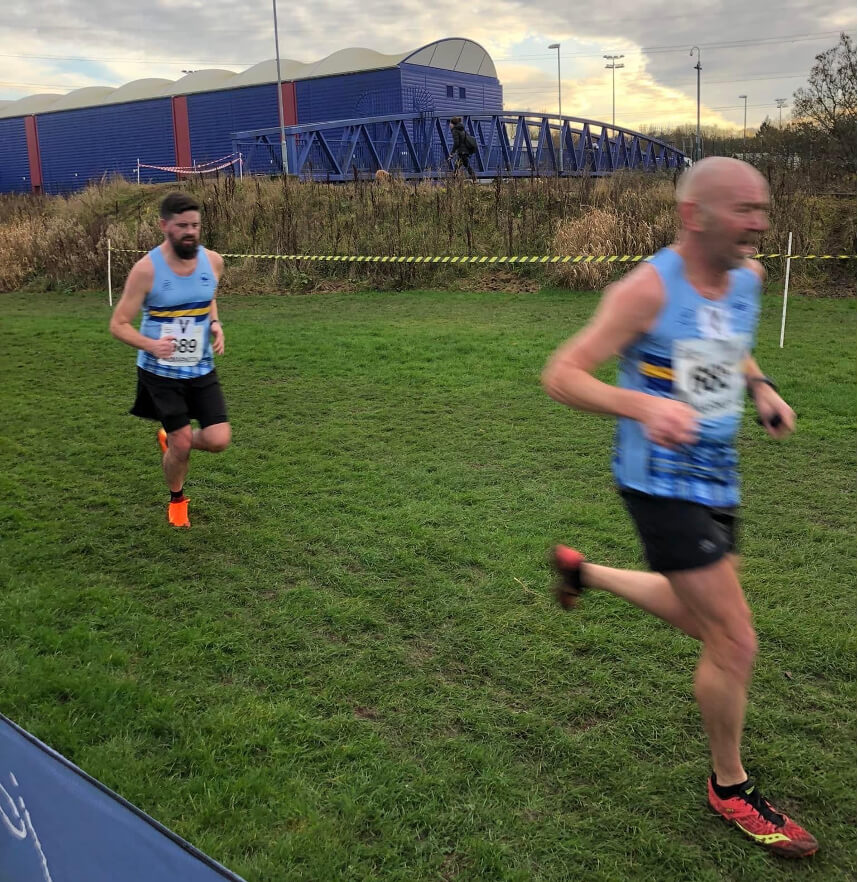 Campbell pipping Stephen on the run-in

Gerry gets the “Finisher Photo of the Day” Prize