Summer of Success for Glenpark Youngsters Harris, contesting the under 17 boys 400m was hoping to continue his rich vein of form lately had an outside lane in his heat, after a steady start Harris reached the home straight and showed maturity to not panic qualifying for the final with a top 3 finish.  In the final Harris set off from the gun and despite being passed on the back straight remained calm in his race plan before moving through his gears with 150m to go, approaching the home straight Harris was at full speed scything through the field to win silver in a new lifetime best of 50 seconds. Ruby in the under 20 women 5,000m had the additional task of contesting her event in an amalgamated race with the seniors, after working on a race plan in training in the final preparations it was clear Ruby was sticking to her plan hitting her time targets as she marked the laps completed during the 12 and half lap race.  By halfway it was clear Ruby was within range to secure a new best and her determination till the finish rewarded her with a fourth place finish and a huge lifetime best of 19.46mins.

Only a month ago our junior duo Harris Morrison and Kyle Johnstone enhanced their summer progress with impressive performances at different competitions.

At the late July Glasgow Athletic Miler Meet, Kyle set his sights on a new best over 1500m, with the race having the added advantage of pace maker the focus can be maintained on testing himself, having created a new best over 800m in the previous weeks Kyle was on track going through halfway to add another over the longer distance.  Approaching 300m to go Kyle dug deep into his endurance ability which carried him home crossing the line in a new best of 4.30mins some 4 seconds improvement. On the same weekend, his team mate Harris Morrison travelled to the newly refurbished Meadowbank Stadium in Edinburgh to compete in the delayed 153rd ‘New Year Sprint’ event. Contesting the Open Handicapped 200m for over 16s Harris would be challenging the country’s senior sprinters.  With the event being handicapped with fastest athletes being at the back of the field Harris mark placed him in the middle of the field for the heat, despite a nervous performance the young Harrier claimed a place in the final.

With a large monetary prize on offer for the winner a bit of ‘game play’ by the senior athletes made little impact on Harris who exploded from his start and was powering past the athletes in front of him as he hit the home straight, a mature approach to maintain his technique over the last 50m saw him holding off the fast finishing seniors to cross the line first claiming Gold and the impressive prize pot. 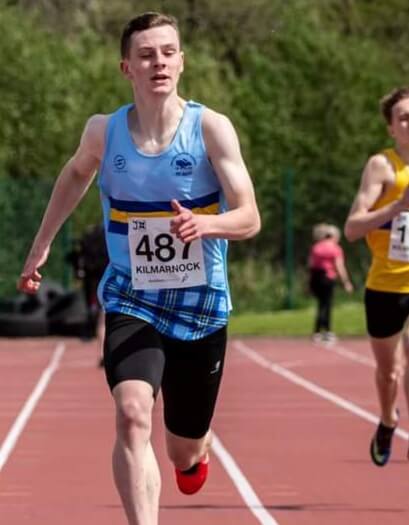 This followed on from Harris giving the performance of his lifetime while representing Scottish Schools in the Schools International in Belfast, Ireland.

16 year old Clydeview Academy pupil Harris, was competing in the individual 400m. As the gun set off the top schoolboys in the UK, Harris occupying one of the outside lanes was quickly into top gear as he powered down the back straight going through halfway mark in contention for the top places, an aggressive bend toward the home straight found Harris competing for the top places, a final home straight where all athletes were evenly spread across the track remained the case crossing the line where only the photo finish could differentiate the placings awarding Harris with a fifth place finish and a fabulous new lifetime best of 50 seconds ensuring he remains one of the fastest schoolboys in the country.